THE HISTORY OF AIRGUNS

Home   News   THE HISTORY OF AIRGUNS

The first air guns were developed as early as the 16th century, and have since been used in hunting, sporting and even warfare. There are three different power sources for modern air guns, depending on the design:

Air guns represent the oldest pneumatic technology. The oldest existing mechanical air gun, a bellows air gun dating back to about 1580, is in the Livrustkammaren Museum in Stockholm. This is the time most historians recognize as the beginning of the modern air gun.

They were also used in warfare, the most recognized example being the Girandoni air rifle.

At that time, they had compelling advantages over the primitive firearms of the day. For example, air guns could be discharged in wet weather and rain (unlike both matchlock and flintlock muskets), and discharged much faster than muzzle-loading guns.

Moreover, they were quieter than a firearm of similar caliber, had no muzzle flash, and were smokeless. Thus, they did not disclose the shooter's position or obscure the shooter's view, unlike the black powder muskets of the 18th and 19th centuries.

In the hands of skilled soldiers, they gave the military a distinct advantage. France, Austria and other nations had special sniper detachments using air rifles.

The gun was developed in 1768 or 1769 by the Tyrolean watchmaker, mechanic and gunsmith Bartholomäus Girandoni (1744–1799) and is sometimes referred to as the Girandoni air rifle or Girandoni air gun in literature (the name is also spelled "Girandony," "Giradoni" or "Girardoni".)

The Windbüchse was about 4 ft (1.2 m) long and weighed 10 pounds (4.5 kg), about the same size and mass as a conventional musket. The air reservoir was a removable, club-shaped, butt. The Windbüchse carried twenty-two .51 caliber (13 mm) lead balls in a tubular magazine. A skilled shooter could fire off one magazine in about thirty seconds. A shot from this air gun could penetrate an inch thick wooden board at a hundred paces, an effect roughly equal to that of a modern 9×19mm or .45 ACP caliber pistol.

Circa 1820, the Japanese inventor Kunitomo Ikkansai developed various manufacturing methods for guns, and also created an air gun based on the study of Western knowledge ("rangaku") acquired from the Dutch in Dejima.Kunitomo air gun trigger mechanism 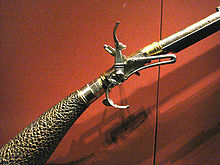 The Lewis and Clark Expedition (1804) carried a reservoir air gun. It held 22 .46 caliber round balls in a tubular magazine mounted on the side of the barrel.

One of the first commercially successful and mass-produced air guns was manufactured by the William F. Markham's Markham Air Rifle Company in Plymouth, Michigan, US.

Their first model air gun was the wooden Challenger, marketed in 1886. In response, Clarence Hamilton from the neighboring Plymouth Air Rifle Company (later renamed to Daisy Manufacturing Company in 1895) marketed their all-metal Daisy BB Gun in early 1888, which prompted Markham to respond with their Chicago model in 1888 followed by the King model in 1890.

The Chicago model was sold by Sears, Roebuck for 73 cents in its catalog. In 1928 the name of the Markham company was changed to King Air Rifle Company after the company was purchased by Daisy in 1916 after decades of intense competition and continued to manufacture the "King" model air rifle until 1935 before ceasing operation altogether in the 1940s.

During the 1890s, air rifles were used in Birmingham, England for competitive target shooting. Matches were held in public houses, which sponsored shooting teams.

Prizes, such as a leg of mutton for the winning team, were paid for by the losing team. The sport became so popular that in 1899, the National Smallbore Rifle Association was created. During this time, over 4,000 air rifle clubs and associations existed across Great Britain, many of them in Birmingham. During this time, the air gun was associated with poaching because it could deliver a shot without a significant muzzle report. Stay connected with our newsletter

This website contains adult material and is only suitable for those 21 years or older. Click Enter only if you are at least 21 years of age.

STAY UP TO DATE

Submit your email to get updates on products and special promotions.